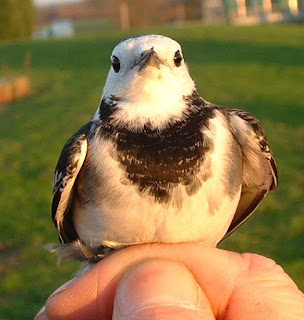 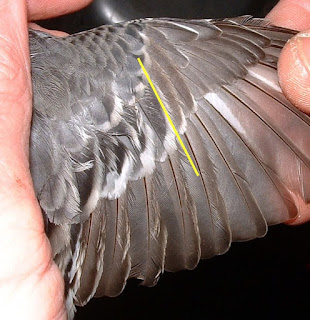 Andy beat me to it but I also managed to get out today. First visit to the sewage works but there were contractors on site trying to sort out frozen valves etc and I was getting in the way so only a few Pied Wagtails to show for it. Some years ago when I first started with Pied Wags, Chris Mead was kind enough to give me some pointers. I remember to this day that he said, 'make the most of January as the early spring moult messes up what you thought you knew'. What he meant by that is that in just a few weeks time birds start pre-breeding moult and it's all change. For now it's easy to spot 1st year birds (age code 5) as in the lower image where the two outer brownish original juvenile greater coverts (the ones the bird fledged with back in summer 2009) clearly contrast with the blacker, white edged coverts it replaced the inner ones with in the early autumn. This is what ringers refer to as a 'moult limit' and is frequently used to age birds. There are other things to see such as one 'new' tertial etc but that's enough ringer speak for now.
Posted by Charnwood Ringers at 14:08