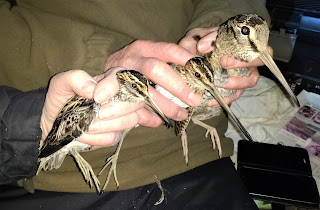 Andy has been working with Forestry Commission in the National Forest for some time now. This has included general conservation work but also bird ringing. Two of the fields at one site are superb in the winter for Snipe and related species, so it was time to organize a mist net session to catch and ring the visiting waders.

Waders generally have superb eyesight, so there is little point trying to catch in fixed nets during daylight. The team therefore assembled yesterday afternoon with a view to setting nets and then catching just after dusk. Once we were happy the conditions were right, we set off to encourage any birds on the ground in to the nets and quickly extracted three species. From left to right above (which is also smallest to largest): Jack Snipe, Snipe and Woodcock. Remarkably this is the second time we have managed the same feat at this particular site.

Update 19th Feb. I also posted the above image on Twitter; it has already received over 36,000 views! The power of social media; just wish I'd written something profound, perhaps about the plight of waders and habitat loss.
Posted by Charnwood Ringers at 07:46 No comments: