We've had some windy spells of late but despite that we've had a weekly outing to our Winter site during October. This site is used as a roost, primarily for Blackbird, Redwing , Chaffinch and sometimes Brambling as in previous years, there is also a feeding station that attracts the usual woodland species. Our total for the month of 300 birds (210 new) includes 10 Wren, 37 Goldcrest, 16 Coal Tit, 41 Blue Tit, 52 Great Tit, 19 Chaffinch, 8 Blackbird, 4 Song Thrush, 3 Redwing and another 4 Nuthatch which brings the site total to 27 our best total has been 32 during 2007. Our September totals reached 256 inc 11 Robins, 36 Blackcap, 28 Chiffchaff, 31 Goldcrest and a Marsh Tit.
A few recent recovery details received back from the BTO include a Willow Warbler ringed as a pullus on 5th June and retrapped 63 days later at Icklesham in Sussex 246km away on 7th August, a Goldfinch ringed on the 1st April found it's way to North Lincolnshire and was killed by a cat, distance of 107km (no jokes please!) and a Greenfinch which was ringed in August 2013 was found with an injury in June this year nr Atherstone in Warwickshire a distance of 24km. 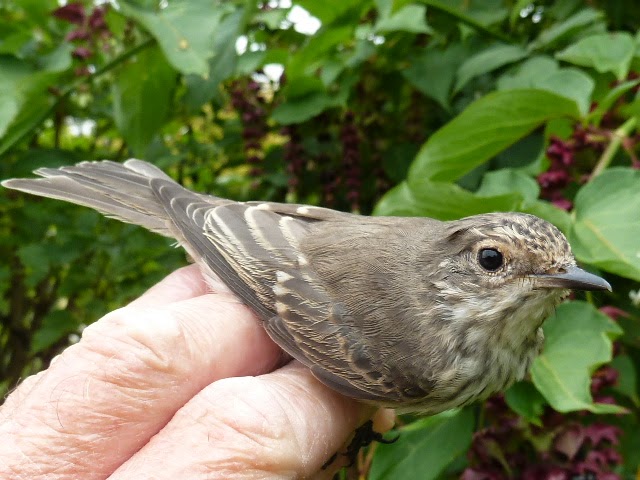 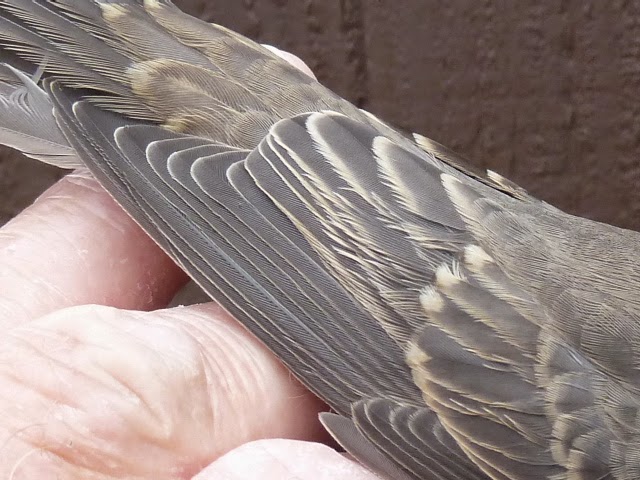 Fresh plumage and Greater Coverts tipped buff as are the tertials makes this a first year. An adult would have very worn plumage. 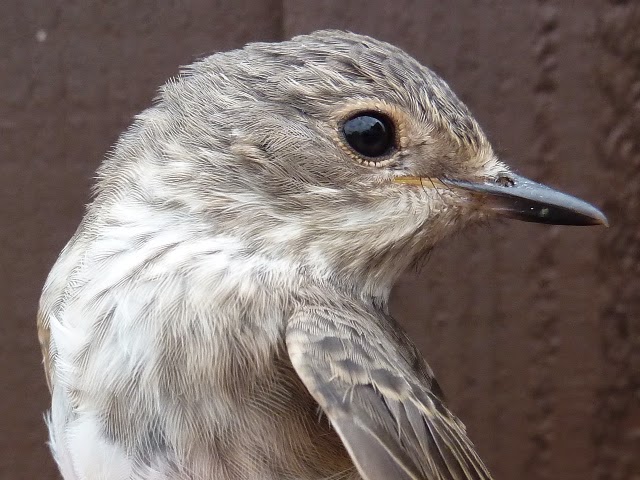 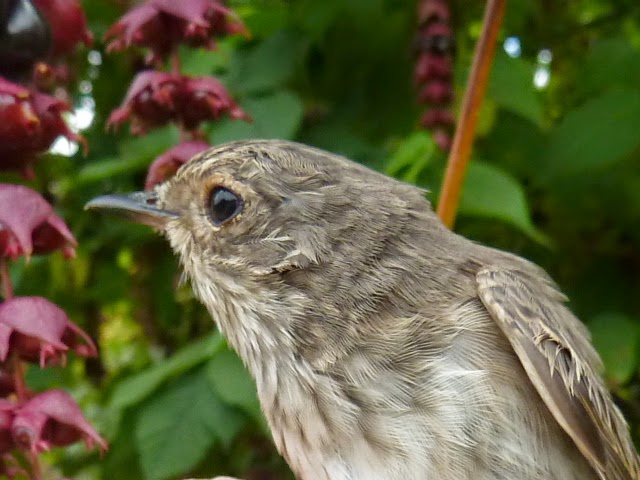 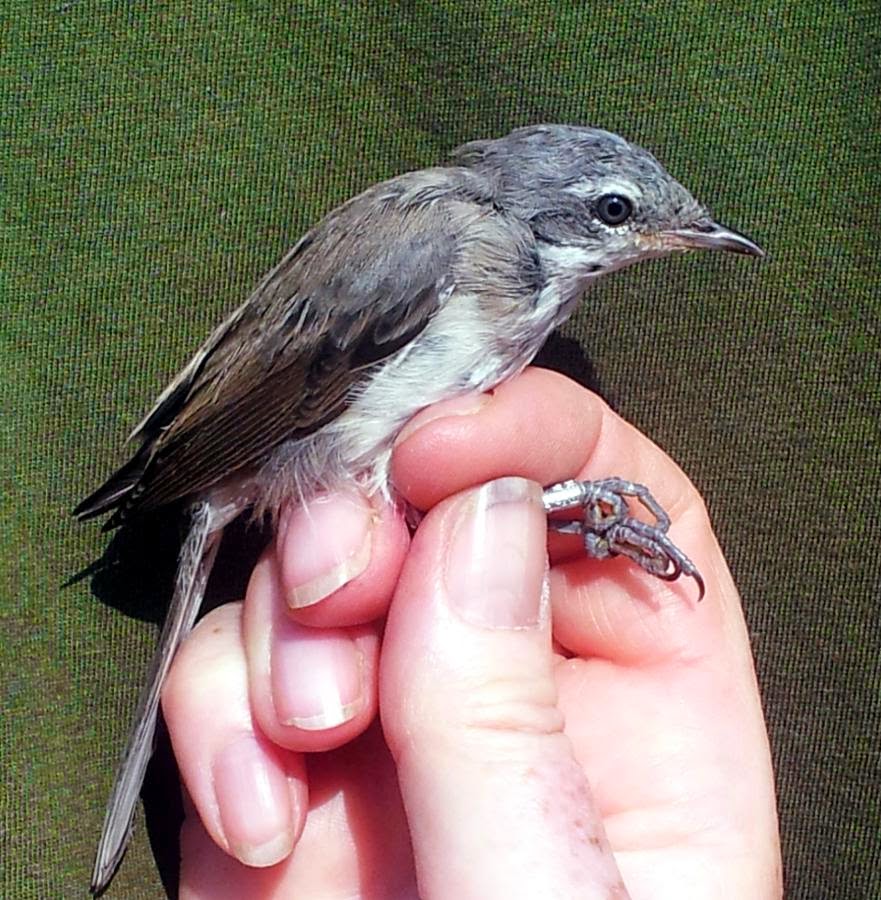 Two late summer sessions at the water treatment site produced 13 Blackcap 7 Chiffchaff 9 Whitethroat and an assorted supporting cast including this young Lesser Whitethroat. The habitat gets better for post breeding foraging and there were still Whitethroat carrying food . Tantalizing glimpse of a probable Marsh Harrier flying through to the south and a calling Sandwich Tern overhead added to the excitement.
Posted by Charnwood Ringers at 22:51 No comments: 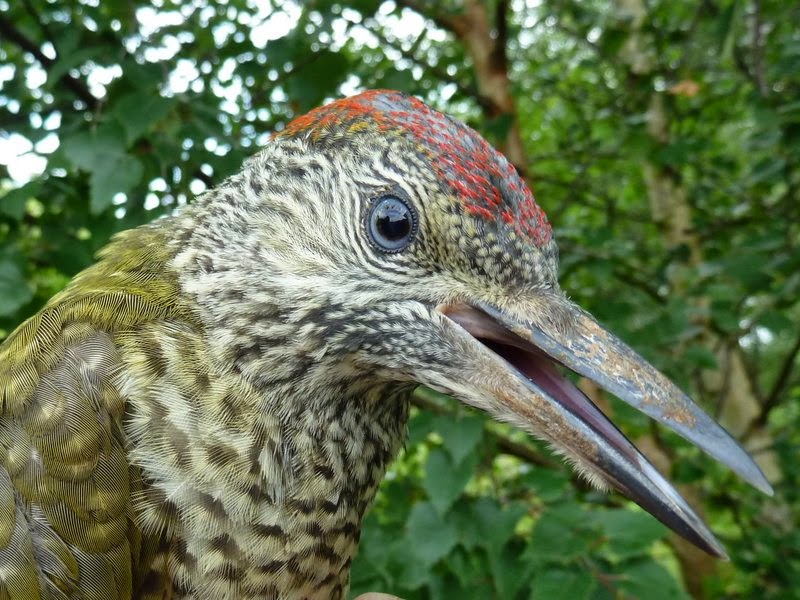 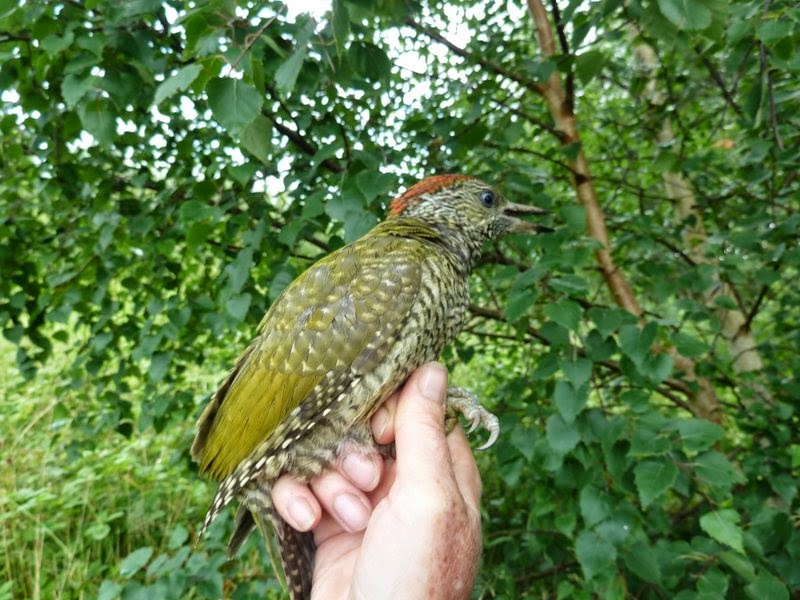 We also caught a juvenile Great Spotted Woodpecker. It was also great to catch 17 new Reed Warblers for the year, including 4 recently fledged, our first of the year.
Posted by andy smith at 05:04 No comments: 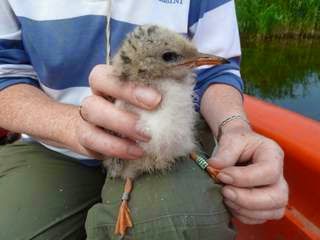 Today 29 Common Tern were colour ringed at Watermead Country Park. This brings the years total to 34. 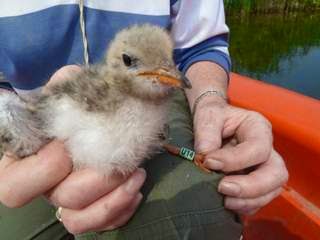 The nesting rafts have all been very successful. A massive thank you to Dale and Jenny for their fantastic help.
Posted by andy smith at 15:19 No comments: 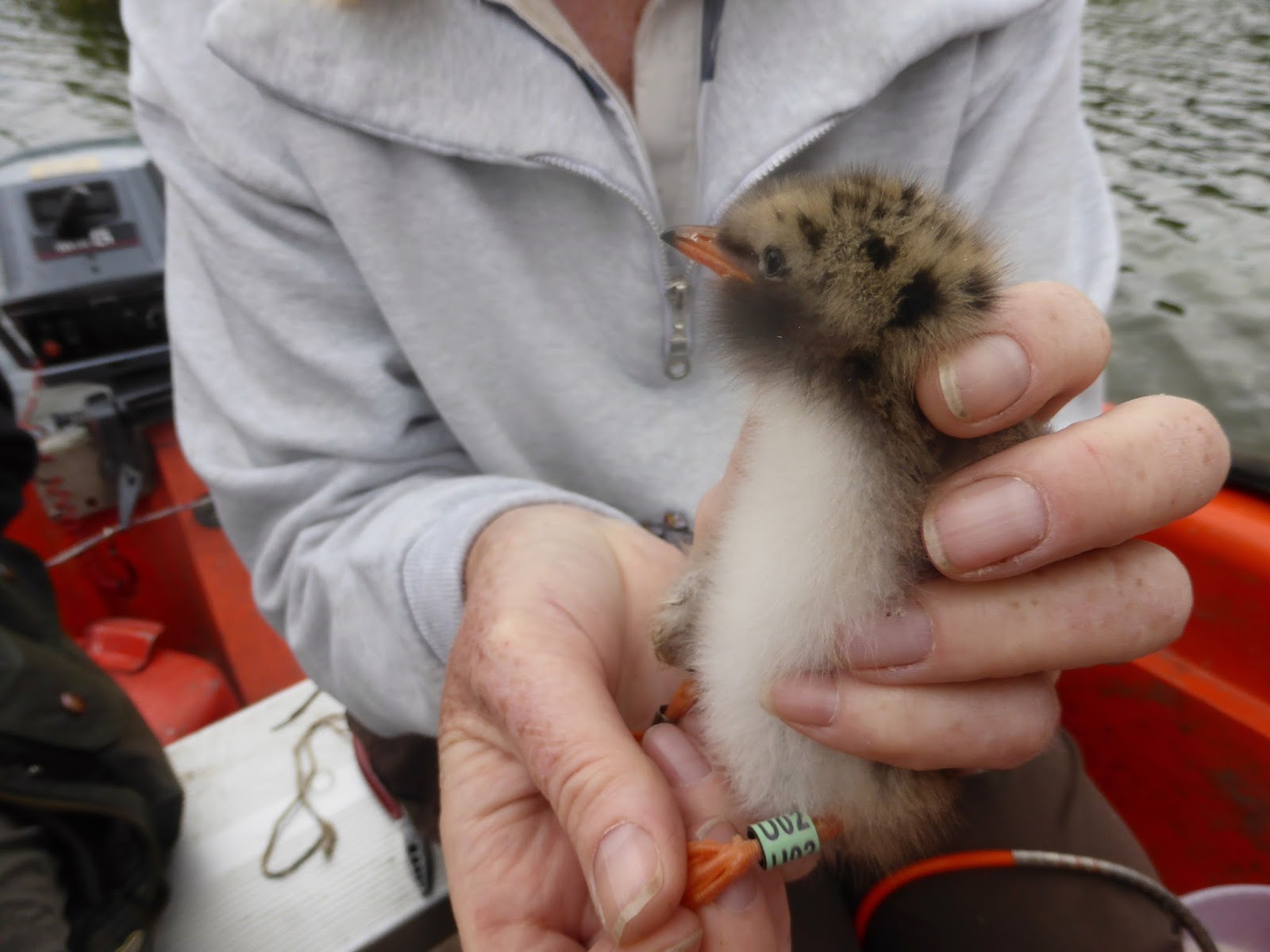 Today we started our Common Tern colour ringing project. A total of 4 chicks were colour ringed, but with more to follow in the coming weeks. 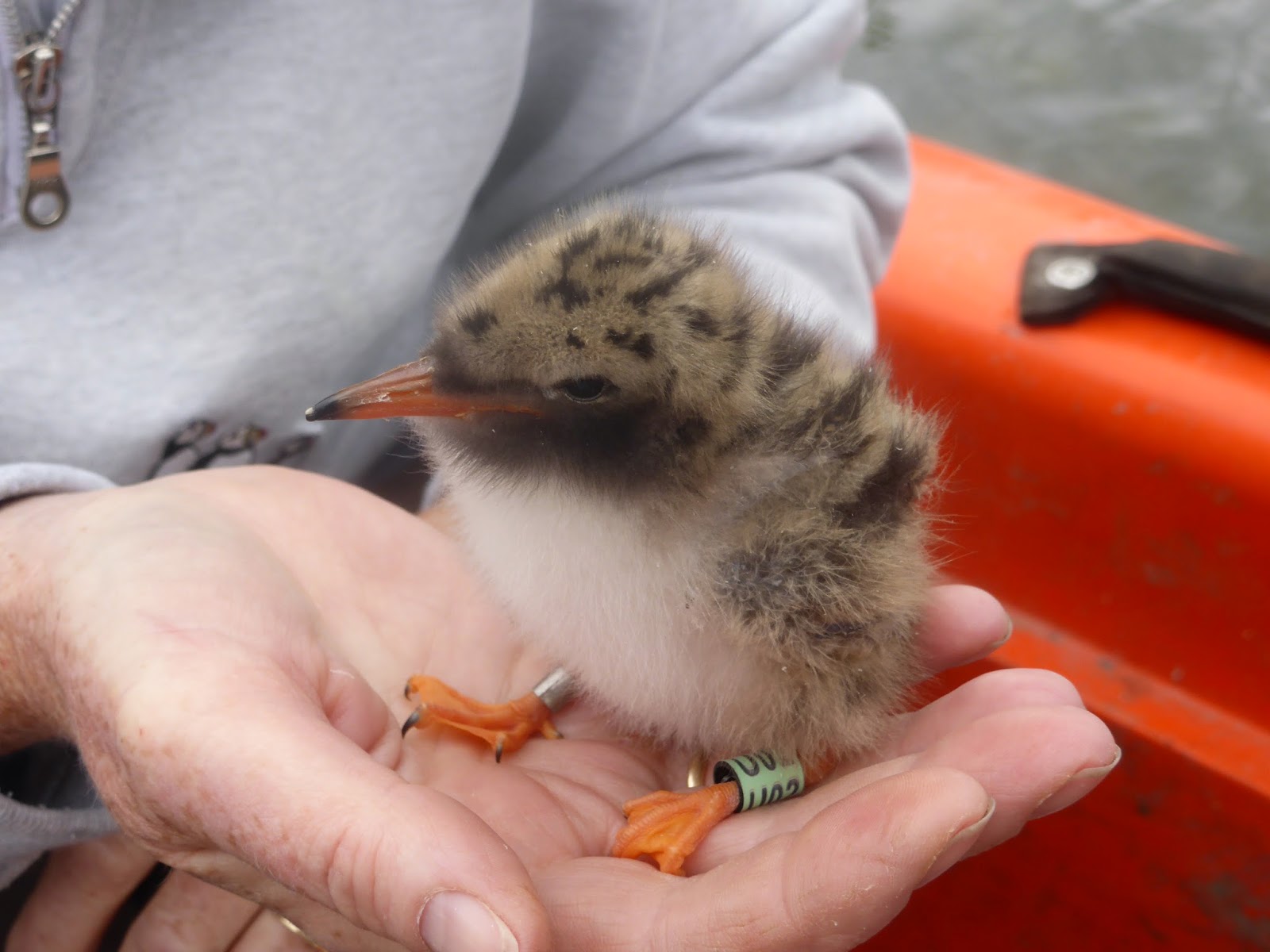 They looked rather smug with their new "Bling"!
We are using engraved colour rings, which are placed on the left leg, a metal on the right. They are Lime green ,with a black code. The code is U00 to U99.
We are looking forward to plenty of future sightings of these pioneers!
We have several questions that we wish to answer from this research. Hopefully we will find out more about the migration routes of our WCP terns. Are there important stop over sites where our young terns linger on their long journey south? Will individual terns return next summer and will they use the same raft? Which water bodies locally will our terns use for feeding? How far might they travel in order to find food?
To report colour ringed birds go to the European colour ringing website at www.cr-birding.org This site is currently being updated ,but links to the various species can be found here. 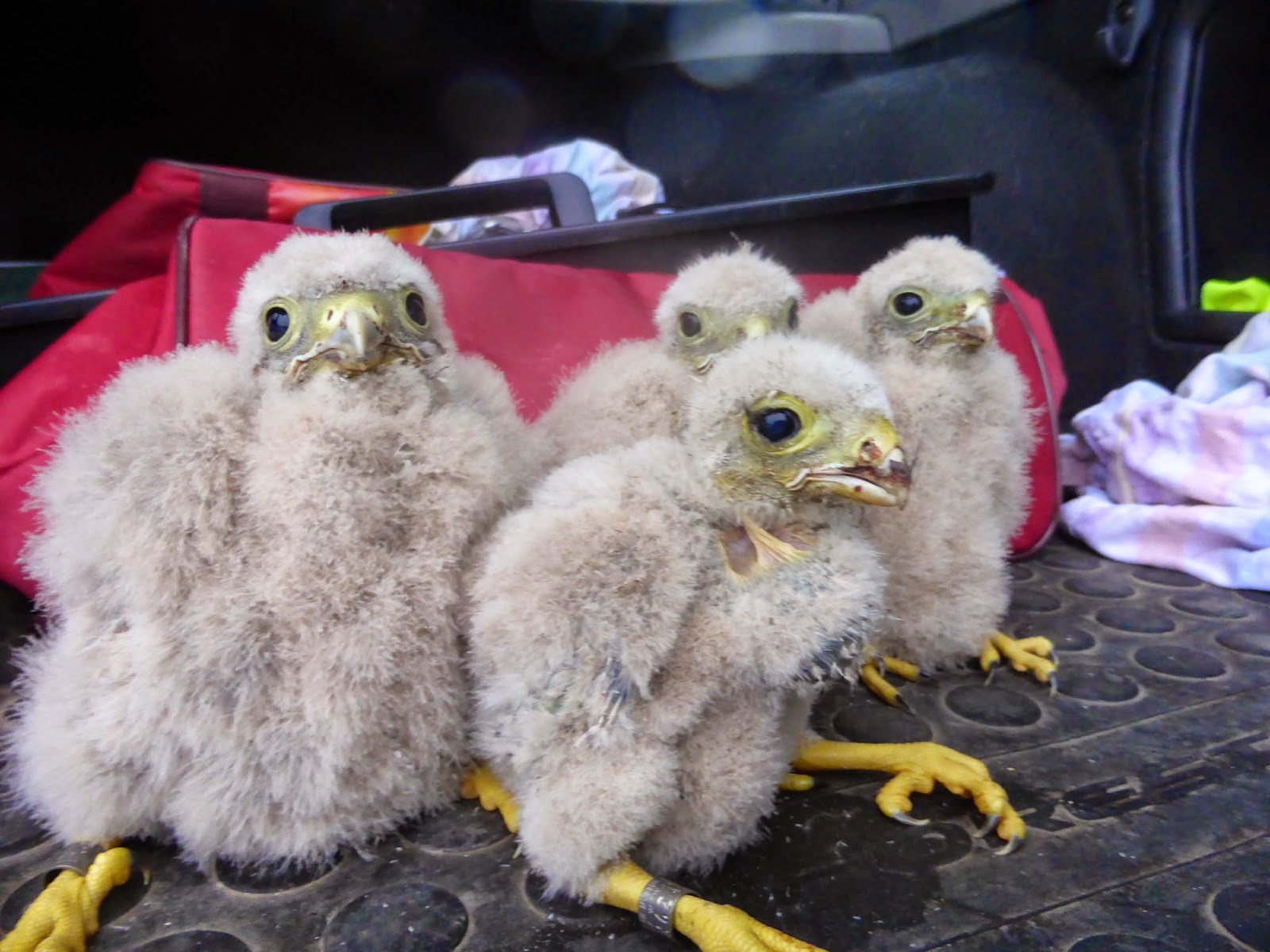 Four Kestrel pullus were rung at Thornton. They have again used the box we put up in an oak tree. 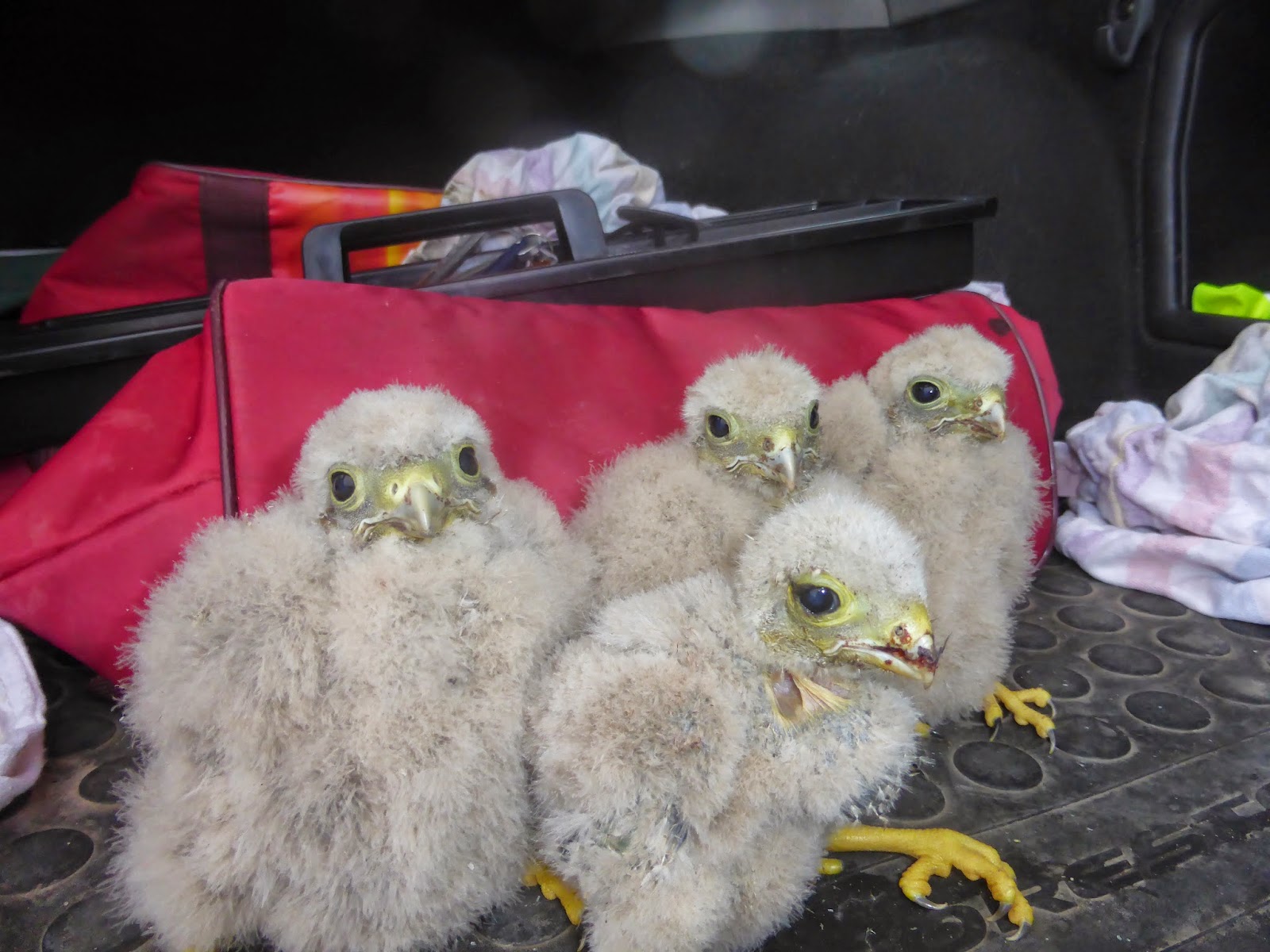 It is very rewarding when a box you have made and erected is deemed, Fit for Purpose!
Posted by andy smith at 12:05 1 comment:

A brief session at the water treatment works scrub resulted in among other things a cracking apparent female Lesser Whitethroat Sylvia curruca with a full on brood patch and distended stomach, suggesting she is at least an expectant mother so there should be some little Sylvias' to ring soon. Strangely I heard nothing from the male that had been singing here for the last couple of weeks, presumably the father, so where has he gone? 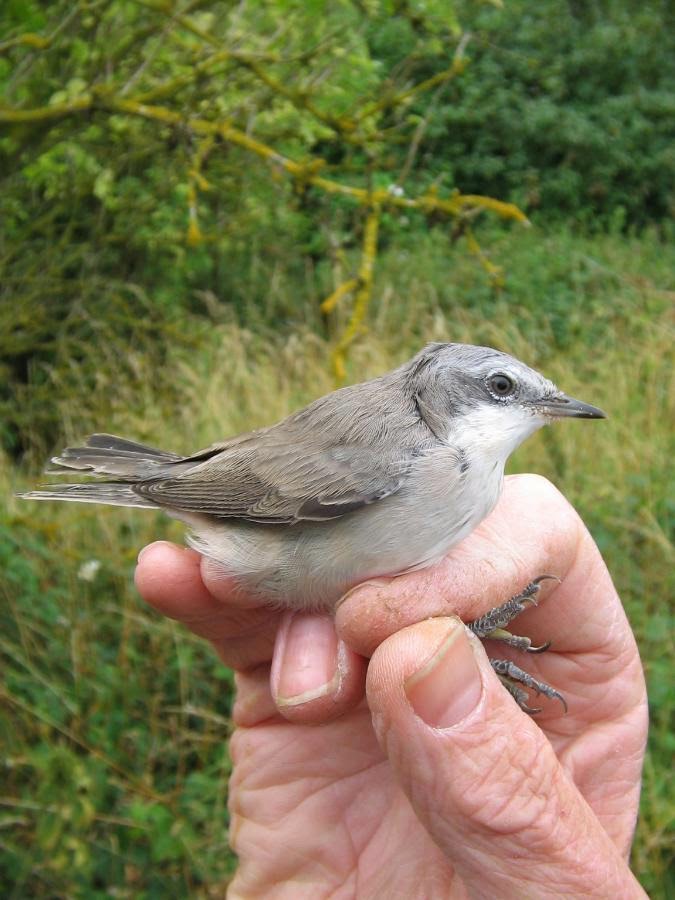 Posted by Charnwood Ringers at 14:39 No comments:

Yesterday we paid our first visit to our Tree Sparrow colony, being a little later than last year we found several boxes already containing very young chicks, we had another 4 containing eggs and 4 with the start of a nest, although I don't think 2 of these will continue as they were either side a box which was buzzing noisily! This site also had boxes containing eggs of 4 Great Tits and a Blue Tit.
Today with the help of one of our trainees we checked the boxes at our woodland site, results were 14 with eggs of Blue Or Great Tit ranging from 2 to 11 eggs, so some just starting to lay, 6 were in various stages of building and 10 not in use yet, another check in late May and we should have a few chicks to ring.
Several Cuckoos were seen and heard along with Buzzard, Blackcap, Willow Warbler, Chiffchaff and a Garden Warbler among others.
Posted by chris at 13:01 No comments: 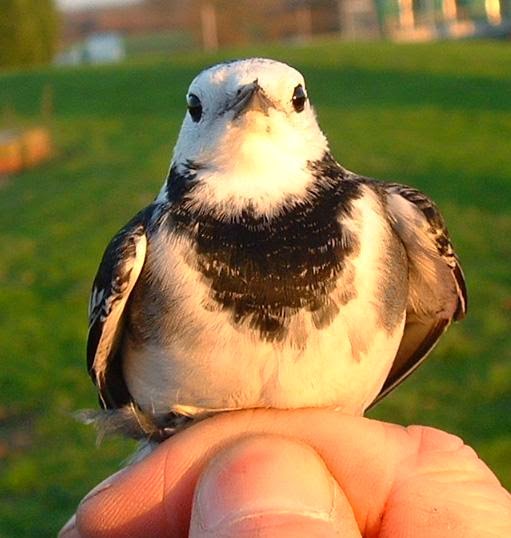 There were plenty of hirundines at the WTP but it was too windy and the nets were blowing all over the place so had to take down before I'd got started. I did however catch a couple of dueling male Pied Wagtails. There were 20 or so Yellow Wagtails too so future visits when the wind drops may produce that species for the first time in a few years.
Posted by Charnwood Ringers at 07:56 No comments: 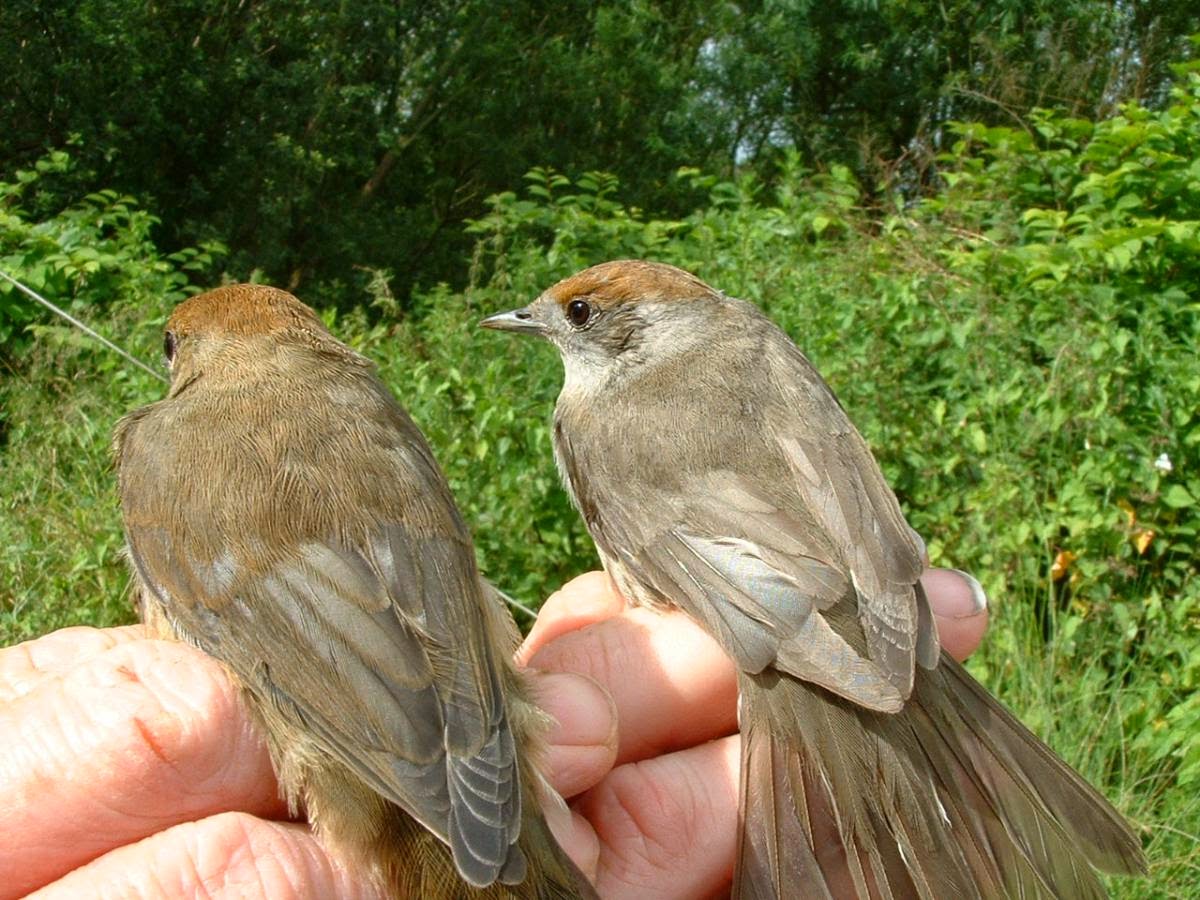 The summer migrants are certainly trickling in now. A brief session this morning at the water treatment plant (as someone suggested might sound more salubrious compared to sewerage works) there were Chiffchaff, Willow Warbler, Whitetheoat and Blackcap (3 of the latter ringed). Also Swallow, House Martin and Yellow Wagtail on show.
It was however a bit chilly and I would on reflection have been better employed catching hirundines in the compound than the handful of passerines in the scrub. If the weather is dull tomorrow I may go for the former.
Posted by Charnwood Ringers at 08:02 No comments:

Our group secretary Chris sent us an email last night to request final data for 2013, to give an update on the totals for the year (just over 2,500 birds) and to ask "what will be the first bird for the new year I wonder ? Blue tit..again! First bird for 2013 was a Blue tit on 1st Jan at Grace Dieu".

Well, always one for a challenge I blew the cobwebs off this morning and headed for the sewerage works where I knew I could find a sheltered spot out of the wind. Just after 9:30 to my delight and to buck the trend the first bird ringed was .... Chiffchaff. This was followed quickly by a couple of Long-tailed Tits. Just as I was warming up the heavens opened and that was that. It rained and blew a gale for the rest of the day. Up and running though.
Posted by Charnwood Ringers at 11:55 No comments: