Spent a day on the reserve checking the progess of nests we are studying as part of the BTO's Nest Recording Scheme, which along with the Ringing Scheme is part of the Demography Unit (see http://www.bto.org/volunteer-surveys/nrs). First we checked on four Lapwing nests that we have been monitoring. At the first nest the female was still incubating. The eggs had hatched in the second nest a couple of days ago and today we managed to locate the three chicks. The final two nests had also hatched.

Lapwing chicks at this age defend themselves from predators by hiding, which usually means putting their head under some vegetation and staying still, "if I can't see you then you can't see me".


The chicks are quickly ringed and released, so that disturbance is kept to the minimum.

We then went off to see what other nests we could find for our project. We soon found, among others, a linnet, reed bunting and dunnock. We will keep track of how these nests progress and send in the data to the BTO at the end of the season.

Posted by Nigel Judson at 12:43 No comments: 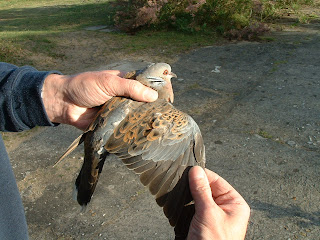 That got your attention didn't it? Not one of today's birds sadly but please read on .... Andy, Barry and I were in the reedbed from 6:00 am today and the weather forecast was spot on; cool with light breeze for the first half of the morning. The air was full of song but with a typically slow early season start we caught just 22 birds with 9 nets. A nice mix of Reed and Sedge Warblers, Reed Buntings, assorted Tits and Thrushes. Some of the Reed Warblers have made the sub-Saharan round trip a few times now and it's always great to have them back. As long as we don't get a repeat of 'summer' 2012 things are looking promising. One unexpected delight yesterday was a Turtle Dove seen well by the rangers at the southern end. It's been a long time since I ringed one of those so forgive this indulgent reminiscence. Turtle Doves are in SERIOUS trouble having declined a frightening 93% since the 1970's. The RSPB and others are working hard to investigate the underlying cause. The current edition of 'Birds' has a feature piece on this very subject. Please visit www.operationturtledove.org
Posted by Charnwood Ringers at 14:40 No comments:

To check or not to check? Part 2

Seventeen days ago I checked my Tree Sparrow colony, so another visit was now due. I found 7 incomplete clutches and one with very young chicks, maybe a day old, the rest of the boxes were either empty or still at various stages of building.
The 2 boxes that had half built nests of moss now contained a sitting Blue Tit and Great Tit.
The woodland site had 14 boxes with incomplete clutches belonging to either Blue or Great Tits, the other 18 were empty, but i'm still hoping for a few late comers to take up residence.
Posted by chris at 01:15 No comments:

Where are the Wheatears?

I keep checking my traditional 'Wheatear' spots every day and so far ..... nothing! This should be peak time for Greenland Wheatears but not so far this year in this part of the county. So, just to cheer myself up here's one I caught earlier! 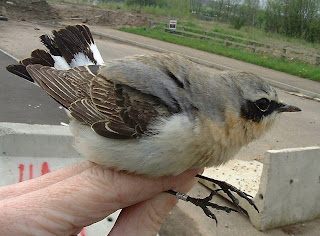 Posted by Charnwood Ringers at 15:19 No comments: