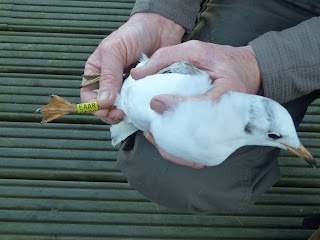 First winter Black Headed Gull. Rung as a pullus at Lommel in Belgium in May 2010. 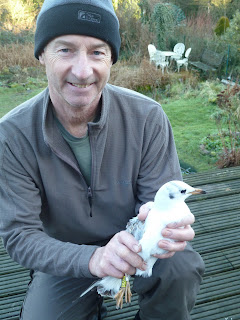 Happy ringer having been successful with his Christmas present. 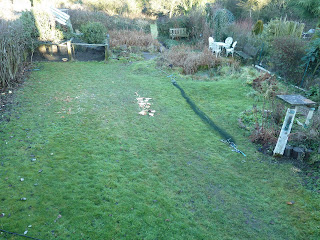 Most people get socks or a new jumper for Christmas, I got a Whoosh net. I was at last able to try it out at the weekend and my first and only capture was the colour ringed Black Headed gull that has been frequenting Thornton and my garden since November. I had already contacted the Belgium ringers responsible for ringing this gull and they were very grateful for the data. I am however new to ringing gulls and I failed to measure the length of the bill and head, which would have enabled me to possibly sex it. With ringing there is always more to learn!
Posted by andy smith at 12:31 4 comments:

It was good to get back to our roost site this weekend, as Dec 12th was the last time we were there due to the bad weather. The afternoon session with 5 nets produced 40 birds, 24 new and 16 retraps. Unusually we didn't catch any Blackbird or thrush but there were lots of Chaffinch moving about and 21 were caught. We would have had a few more titmice but the feeders had only been replenished a couple of days before and only a few had returned to them. The only Goldcrest of the session was an adult male first ringed in August 2009 and was in good condition, as was most of the birds we caught. Totals as follows retraps in ( )
Chaffinch 17 (5)
Nuthatch 1 (1)
Great Tit 1 (6)
Blue Tit 2
Coal Tit 1 (2)
Dunnock (1)
Goldcrest (1)
Wren 2
Posted by chris at 09:26 No comments: