.... as I was saying and Bruce Almighty

Today Chris and I decided to have half a day ringing at our Blackbrook site, where the Tree Sparrow colony is situated. The weather was cold with the sun breaking out later in the afternoon. Steve and Mandy had told us that Yellowhammers were coming into the Partridge feeders. and before long we had a couple in the nets. 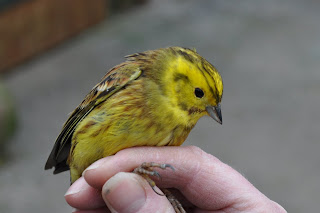 Like the Chaffinches in the previous blog, Yellowhammers obtain the breeding plumage by the action of abrasion of the feathers. The brown tips gradually wear away to reveal the bright yellow of the feather. 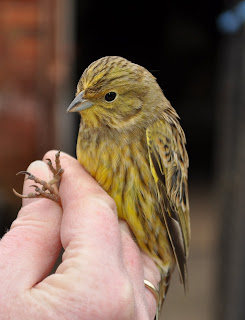 Like a lot of birds the female of the species is duller, this helps camouflage them while breeding. 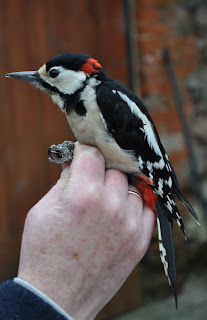 Great Spotted Woodpecker
When Mandy returned from feeding the Pheasants, she let Bruce the Springer Spaniel (and father of two of my dogs) out of the farmhouse. He promptly decided to wee in Chris's ringing box, not a bit was spilt outside the box. We just have to teach him to put the lid down afterwards and he will be a real "Renaissance Man". Hence he's called "Bruce Almighty".