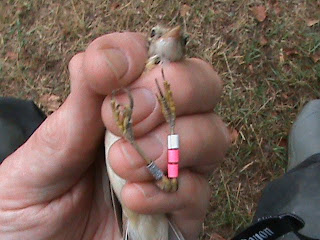 Ringing at Watermead on 31st July was going quietly with only 27 birds caught. This did however include new Reed Warblers, Whitethroats, Blackcaps and Willow Warblers. Then as I was approaching a net a bird flew in that seemed very colourful. On extracting the bird I noted it was an adult Reed Warbler, adorned with pink and white colour rings. I processed the bird and noted all the details, especially the fact that the colour rings were on the left leg, with two pink above one white. The metal ring was on the right leg. I have now contacted the B.T.O. and they have informed me that the bird was likely to have been rung by Brandon Ringing group. I am now awaiting confirmation of this. The ring used was of a recent sequence so it is likely that the bird was rung earlier in the year and then relocated to WCP. It had a brood patch score of 4 ,which would indicate recent breeding.
Posted by andy smith at 02:25