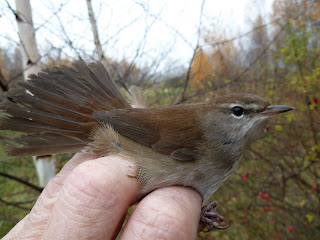 The Watermead reed bed was a dank and misty place on Saturday morning as I set five nets, hoping perhaps to catch a Bearded Tit. Thinking positively was not having much affect as all I was catching were Blue and Long Tailed tits. Still, at least I was discovering what was in the reed bed and that Reedlings were not here yet. I live in hope. Then I was rewarded with this fine male Cetti's. I was able to sex it on size, it weighed 15.2 gms, females only reach 12.5 gms. Also the wing was 61 mm, which is at the extreme upper limit for a female. The female that I caught back in September had a wing of 58 and only weighed 12 gms. Having been ringing at Watermead for 12 years and never having caught a Cetti's, these captures are good evidence that they are increasing. All thanks to great management by Dale and his team.
Posted by andy smith at 12:50