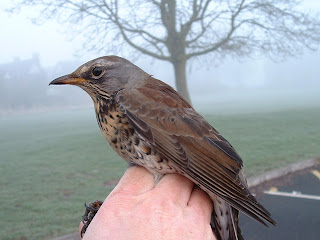 I wasn't intending to catch any birds today (Saturday), snow, windy weather and all that, so I just kept the bird feeders topped up and stuck some apples in the Cotoneaster bush, and also placed some on the lawn where my whoosh net area is. Just an odd couple of Fieldfare now had been taking the last few berries from the bush, I've had up to 5, hence the apples in the hope of keeping them coming to the garden.
A break from doing some houshold chores (a womans work is never done, sob sob!) late afternoon saw me looking out the window onto the garden, checking what was about; low and behold I'd got Fieldfare coming to the apples in the whoosh area, eventually there were 12, blimey the most I've ever had in the garden at once! Sod's law I hadn't got the net set ( well I wasn't intending to catch any birds!) decisions, decisions, would they come back if I disturbed them? I risked the chance and quickly went and set the net and waited, within 5 minutes I had 10 birds back on the lawn settled and feeding, so I took the catch. Two escaped but I had 6 new birds and 2 retraps that I'd ringed on 28th Feb.
Having processed and released the birds I checked the weight of the two retraps from last time, the female first weighed 92.9g and today it was 85.6g, and the male first weighed 104.7g and today it was 97.4g so both had lost overall about 7 grammes since Feb.
The weight of the new birds caught ranged from 89.3g to 113.7g, this latter bird also had a wing length of 159mm which is 7mm longer than the average stated in Svensson it also felt alot 'chunkier' than the others so made me wonder if there is a small population that come to our shores in Winter from further afield than Scandinavia?
Answers on a postcard please.
Posted by chris at 06:28