Leaving the best until last !!

Had another excellent ringing session this morning in one of our reedbed sites.

The weather looked doubtful with the forecast on Friday night changing with the hour. But we decided it was worth the risk. Nets were open at first light and we managed a couple of net rounds before a heavy downpour. We had to close up for an hour until the rain passed - at usually the most productive time of the morning.

We still managed to catch plenty of birds, especially reed warblers. The great majority were males with the females, presumably, still of eggs or keeping young warm after the storm.

Taking down the nets after a 7 hour stint produced a great end to the day. An adult male kingfisher (Alcedo atthis), while not uncommon it is always nice to catch such a handsome bird. 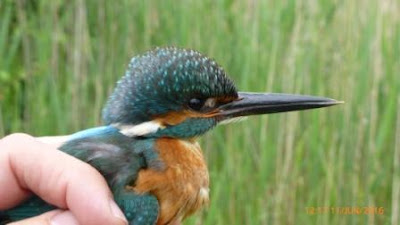 Kingfisher (A atthis) © Nigel Judson
Elsewhere, some members of the group have been busy nest recording. We have a long term study of a tree sparrow (Passer montanus) colony, where I have been ringing nearly 20 years. The first brood has already fledged and the second clutches of eggs are now being laid. The poor spring weather has meant that the first egg date estimates for the first brood are calculated at around 10 days later than the mean, so hopefully they will make up time. Three broods is not uncommon at this long established colony. 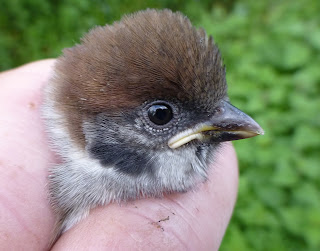