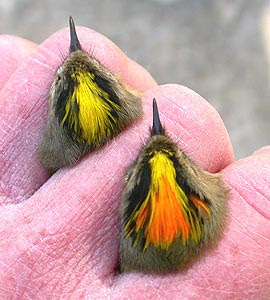 Our totals so far are 1757 new birds ringed with Charnwood Lodge on 570 only 42 down from last years total so it looks like we'll crack that at least. The grand total of birds ringed last year was 1824. Our best year was 2005 with 2274 when we had six active ringers. Numbers always fluctuate depending on availability and activity but also the weather. Some years the ringers (who can often only make weekends) are thwarted by bad weather.

During November we've ringed 14 Blackbirds, 2 Song Thrush, 5 Redwing but only 3 Goldcrests so far at the lodge. Last month we had 9 Blackbirds, 7 Song Thrush, 7 Redwing and 7 Goldcrests so we're down on crest numbers. Autumn 2009 has been one of the worst Goldcrest seasons for many years. One coastal site which averages 250 in October had only 5 birds! Just a reminder how to determine the sex of a Goldcrest (if you're luck enough to catch one that is!) is by the colour of feathers in the crown. The bird on the left has fundamentally sulphur yellow feathers (female) whereas the bird on the right is a male with vivid orange/gold.
Posted by Charnwood Ringers at 13:44