The last net round of the day at the sewerage works produced three 'Chiffchaffs' . These were the second, third and fourth of the afternoon and although the first two were typical olive/yellow and dull nominate collybita, the third was so pale and silvery it looked like a totally different species. A bit like the last few holes at The Open when the light is failing and the commentators say 'you can't tell from the TV but it's almost dark'; well, by the time I came to the pale Chiff it was, so forgive this underwhelming image taken without flash, to avoid false bleaching, but it doesn't capture just how dark it had got. 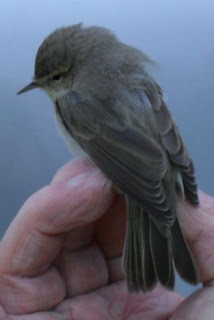 Posted by Charnwood Ringers at 12:19